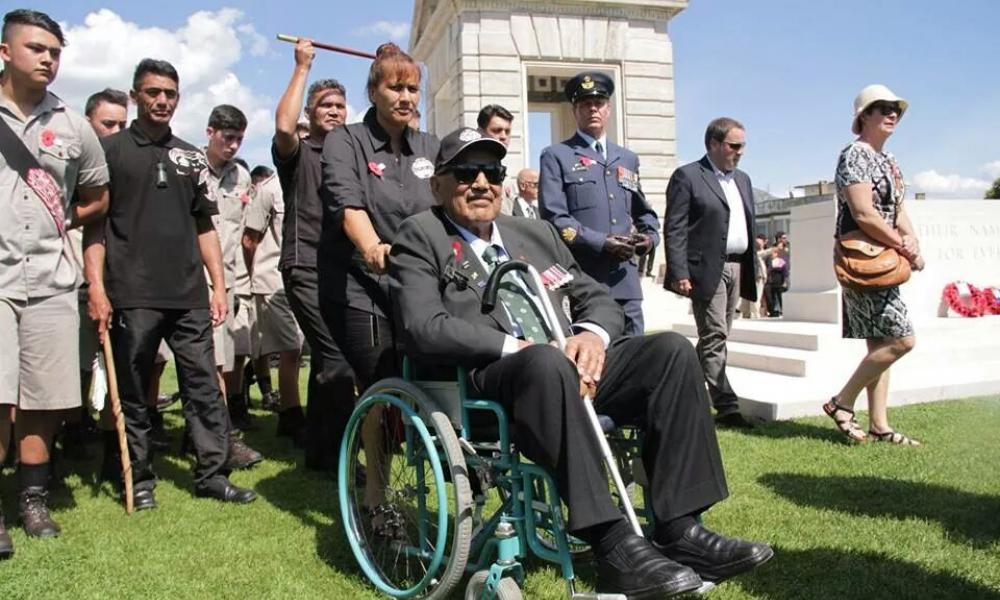 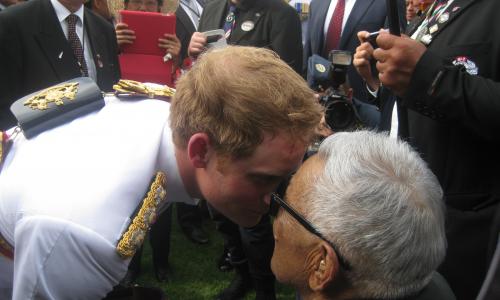 ​I’m the fortunate one…

​I’m the fortunate one…

From our large Raihania whānau I was given the privilege of escorting Dad (Noel) to Italy. Whilst I knew it was going to be a trip of a lifetime, it never dawned on me how life changing it actually would be. I grew up in a family where Te Hokowhitu a Tū was a way of life for Mum (Ana). She and Dad taught us waiata of the 28th Māori Battalion, yet Dad, a 28 Veteran, would never speak of the war.

On 8 May 2014 Dad and I started our journey flying out from Gisborne with tears quietly trickling as the whānau wished us bon voyage. It wasn’t until I clicked the seat belt that it hit me, “I’m ‘IT’ for Dad”, this tino taonga loved by so many. I’m his “kaitiaki”, charged with making sure he gets home safe and well. OMG the plane just got heavier! Dad was the only 28 veteran with the tour group of 50 adults and 30 Secondary School students all hailing from the East Coast and all of whom were descendants of a C Coy Soldier. His presence was priceless and the tour would not have been the same without him.

One of the cemeteries we visited was Forli War Cemetery where twelve of the forty-one 28th Māori Battalion Soldiers buried there, were from Dad’s Platoon. He visited all of his comrades. It is unimaginable to guess what his recollections were as we laid a poppy at each of their beautifully kept graves. Dad’s 1st cousin, Ned Pohatu, is buried there. Dad recited the story of Ned’s demise to the Tour party, it was a devastating end to his young cousin’s life.

The emotions of seeing row upon row of young Māori men played with the mind, confusion as to why they came here to fight in a war that wasn’t theirs. Did they have to make that ultimate sacrifice for our freedom? What would have happened if our men didn’t come to this foreign land?

I suppose we will never ever really know, but I do know if the Germans had won the war, they would have no hesitation invading Aotearoa and wiping out our race. For this reason we will never forget them, they truly did sacrifice their lives for our freedom.

As I mentioned the urupā are a sight to behold with a flower garden fronting each grave. The local children in every district visit the graves of our men every year, singing to them and laying poppies. It was amazing to see them and their parents at the cemetery when we arrived. Our rangatahi gave a performance especially for them, sealing a lifelong relationship and showing our appreciation for looking after our loved ones.

The Italians are such a beautiful race. They are expressive, emotive, honest, loving, caring people. A lot like us really. They were in absolute awe of Dad. It became evident there was a deep connection and gratitude by the Italians for the 28th Māori Battalion. Everywhere we went they would approach Dad to embrace him with a kiss, touch his face, have a photo, salute him, shower him with gifts.

It was so over-whelming seeing these foreigners feeling the same way and respecting Dad like we do back home. The tears that flowed from when they met Dad was heart wrenching especially when they would relate their war stories and how the Māori Battalion saved their lives and liberated their villages.

It was especially poignant when the children offered the same respect showing they were aware of their country’s history and the part the Māori Battalion had played in their liberation. Once again Dad took it all in his stride, keeping his emotions within, and thanking them all for coming and sharing their stories… in the Italian reo of course!

It was evident our future generation felt the emotion, heard the stories, saw the devastation, met the descendants and best of all got to know Dad, not only as a figure head of the legendary 28th Māori Battalion, but as their very own Pāpā. Thanks to their acquaintance the Raihania Whānau just extended by 30 mokopuna.

Meeting HRH Prince Harry was another nice little surprise. Prince Harry attended the 70th Commemoration of the Battle of Cassino. He was flanked by the New Zealand Governor General, Jerry Mataparae and his wife and the Italian Ambassador along with forty New Zealand Returned Servicemen who fought in the Battle of Cassino.Our tour group performed the thunderous infamous haka, Rūaumoko,to the Prince and proceeded to entertain the hundreds of people that came to commemorate the occassion.

Another special occassion was meeting Pope Francisco. This wasn’t a chance meeting but one that was organised for Dad by the Honorable Chris Finlayson and the New Zealand Embassy. Without their help there’s no way we would have been able to navigate our way to the front of the square with 30,000 people in attendance! He truly is, as they say a People’s Pope and very charismatic.

Witnessing how the crowd reacts to him was an experience in itself. It was a huge privledge to meet His Holiness and having this photo will last a lifetime in our whānau. Thank you to the Honorable Chris Finlayson and the New Zealand Embassy for making this happen and taking care of us.

Dad and I wish to thank all of you who supported our trip to Italy. Thank you to Monty and his tour team, the ladies at House of Travel, the Honorable Chris Finlayson, the Italian Ambassador and his staff and lastly to the Tour Group and the Rangatahi, this has been a trip that will connect us forever.

Finally, I really was the lucky one…to be right there by Dad’s side, feeling the emotions and hearing the stories. When I arrived home there was a certain relief that I had fulfilled my duty for my whānau and got Dad home safe and sound. But there was also a loneliness, an inner cry and silence. I didn’t want to leave Dad, I didn’t want to stop feeling the emotions and hearing the stories.The trip may be over but the stories will live on. As Dad often said on the trip, “The ultimate sacrifice – Theirs is not to reason why, theirs is but to do and die! ”