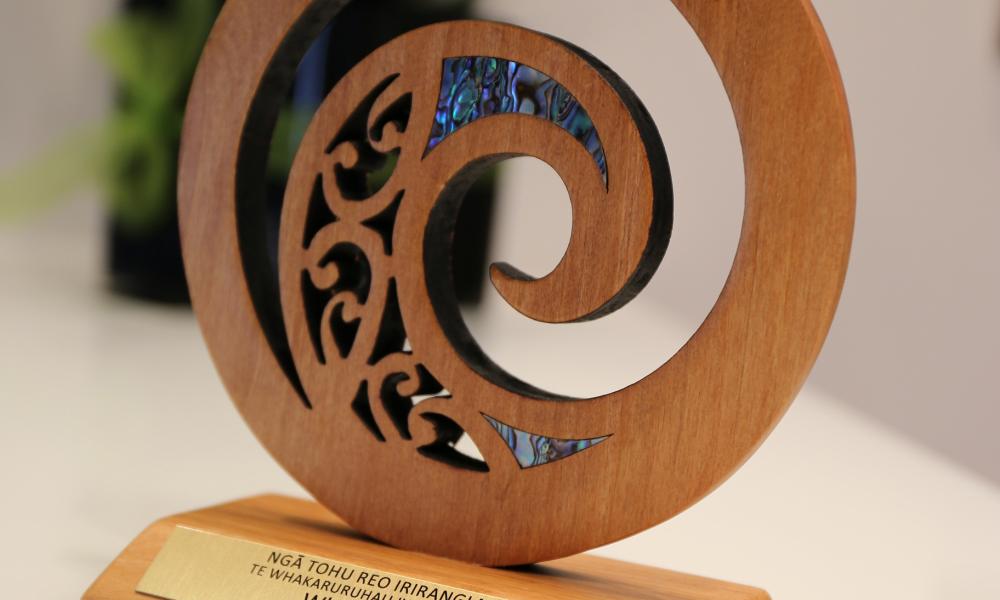 Te Reo was the winner on the night at the recent Iwi Radio Awards, and Ngati Porou was there in full force to help celebrate the vital role Iwi stations play in contributing to tribal language development.

Te Reo was the winner on the night at the recent Iwi Radio Awards, and Ngati Porou was there in full force to help celebrate the vital role Iwi stations play in contributing to tribal language development.

The 2014 Iwi Radio Awards were held in Rotorua earlier this month, and our iwi station Radio Ngati Porou was nominated for five of the 17 awards, including Iwi Station of the Year, which were handed out during the glittering ceremony. At the end of the evening the station took home three awards, and also co-presented a major new award named in honour of the late Hon, Parekura Horomia.

"We are very lucky that the Nui sponsors the costs associated with our transmitters- that’s power, repairs maintenance, rentals etc. and we have 7 of them from Potikirua ki te Toka Taiau. Our Station IDS use Ngati Porou landmarks to role to promote te reo identify the area the transmitters are in and promote the Nui and its role in ‘keeping Ngati Porou connected’.

"In the current debate around the new Reo Maori strategy kiwi have been criticised for not investing in Maori language revival. I’m proud to say our iwi is investing in our language by supporting RNP and our role in promoting te reo o Ngati Porou.” She said Te Runanganui o Ngati Porou, Mangaheia 2D Incorporation and Hauiti Incorporation and Radio Ngati Porou sponsored the 2014 Iwi Radio Awards – which was a tribute to the late Hon. Parekura Horomia.

The second award presented to Radio Ngati Porou was the Te Ohaoha Nui ki te Hāpori award for Outstanding Community Contribution by an Iwi Station. This tohu highlighted the excellent relationship the station has with its communities in terms of the success of the 24hour radiothon it ran to raise funds for the new C Company House set to open in October this year.

Chief Executive of Radio Ngati Porou, Erana Keelan-Reedy says it was a huge honour to win the award on behalf of everyone who gave so generously for the kaupapa. “The generosity of our people never ceases to amaze me. We received $58,000 in pledges and money continued to come in months after the radiothon. Now the whare is almost complete. We have had such a good relationship with the C Company Trust in terms of having access to their interviews with our papa, many of which played throughout the 24hrs.

A big thank you to Uncle Api Mahuika who asked us to do the radiothon and who with, Uncle Noel Raihania, Aunty Kate Walker and Uncle Boycie Te Maro kept vigil at the station during the 24hours and enjoyed the whole event”.

The third award, Pāhotanga-ā-Waho, was presented to RNP for Best Outside Broadcast. Chief Executive of Radio Ngati Porou, Erana Keelan-Reedy says this award is an acknowledgement of the collaborative effort by RNP and Te Aitanga a Hauiti Centre for Excellence to radio and video stream the tangi.

“This broadcast was a labour of love for a man who supported RNP and the iwi radio network and who always had time for the ‘real’ people. It was an honour to be at his tangi broadcasting it to the world. I mean, who else would broadcast a whole tangi? The feedback we got from some of the 69,000 people who tuned in was amazing. People were sitting at their computers crying. I don’t think I’ll ever witness another tangi like it in my life time and I’m so proud we could enable those who couldn’t make it home, to participate too.”

Towards the end of the evening one of the major new awards was presented. ‘Waipapa’, the ‘Hon. Parekura Horomia Reo-ā-Iwi Award’ recognises outstanding work by a station to promote tribal dialect. The award was sponsored by Ngati Porou and Te Aitanga a Hauiti.

Moana Radio was the inaugural winner of this new tohu and Chief Executive of Radio Ngati Porou, Erana Keelan-Reedy says the framed muka korowai was befitting the man who championed iwi radio and Maori language broadcasting.

“The concept of the korowai was given by Derek Lardelli – he korowai mo te reo, and every strand of the korowai was woven with love by Parekura’s niece Fiona Collis. So it is very special. It was presented by Victor Walker who did a fabulous speech which was topped off with a beautiful action song composed for Parekura. It was a great night made even better by our Ngati Porou MC, Te Hamua Nikora. Our humour permeated the whole evening. It was fun.”

The Ngati Porou and Hauiti contingent took Parekura’s kawe mate and the award to Te Pakira marae before the awards ceremony and were hosted by about sixty from Tuhourangi including a lot of their kuia and koroua.

Around 270 people attended the awards including a good number of politicians and ‘movers and shakers’.

“The awards were a great celebration of the work being done by our stations to promote te reo and the unique relationship the stations have with their people. We heard mita from the four winds. We heard how communities, whanau, hapu and iwi support their stations.

We heard how kaimahi are really passionate about what they do. We heard how stations struggle on minimal funding, like Radio Ngati Porou, but can still produce award winning content. Our major sponsor E Tu Maori Reference Group is keen to sponsor again and I’m hoping that’s a catalyst for more business with departments who need to pump their messages through our network. We have been lobbying for an increase to our base funding and we’re hoping the political ears present at the awards that evening will support our tono on the 15th of May when the Budget is announced.”