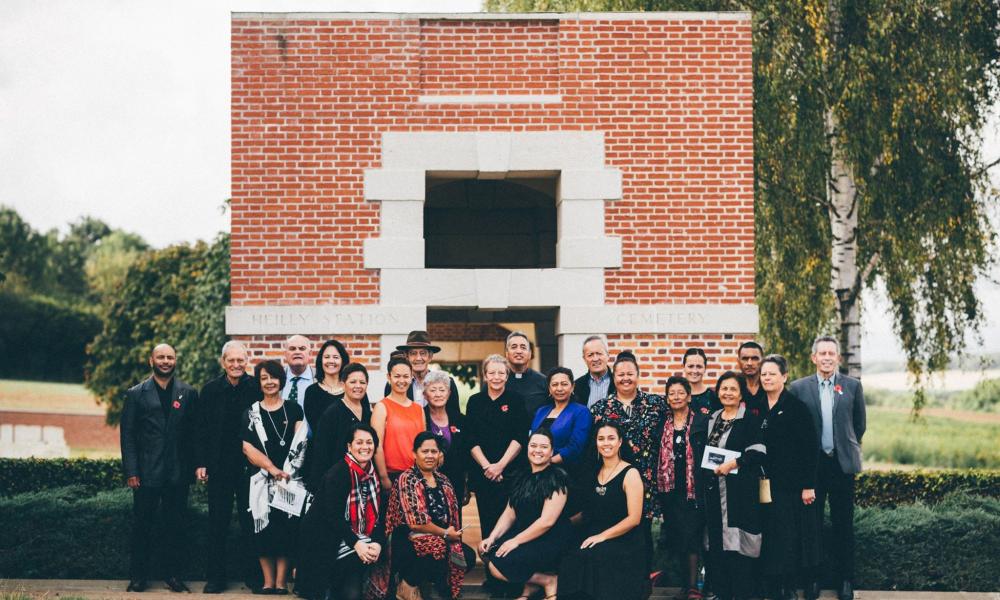 For members of the whanau, most of whom were visiting Uncle Henry’s bur­ial place for the first time, the occasion was a blend of sadness and relief. Henare is someone who has been such an impor­tant ‘presence’ in our whanau throughout the generations

I haere ai Henare me to Wiwi, i patu ki te pakanga

The Kohere whanau journeyed to the Somme Valley in France recently to pay homage to their tipuna, 2nd Lieutenant, Henare Mokena Kohere. The whanau shared the story about their pilgrimage in the December 2016 issue of Nati Link, with the following korero submitted by whanau members, Amohaere Houkamau and Rei Kohere. 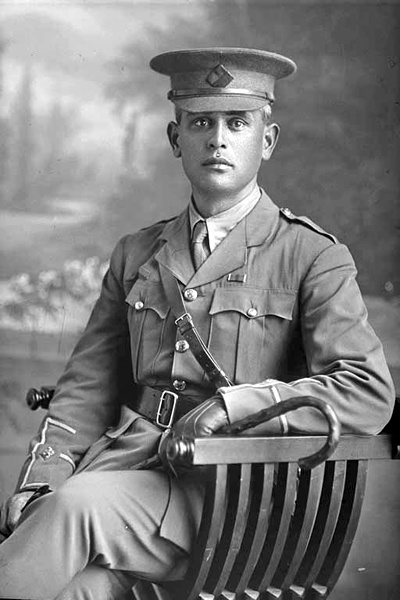 On the 16th of September 1916, 2nd Lieutenant, Henare Mokena Kohere was laid to rest at Heilly Station Cemetery, Meri­court L’abbe, in the Somme Valley. One hundred years later, on the 16th of Sep­tember, 2016, twenty four members of the Kohere whanau, 10 direct descend­ants of Henare and 14 representing the wider Kohere whanau, gathered at his graveside. They had come to pay their respects and commemorate this son of Rangiata, the Waiapu Valley and Ngati Porou, who paid the ultimate price, “for God, for King, and for Country.”

Whanau members had travelled as en­voys from Aotearoa, carrying messages of love from those who were unable to be there themselves, to lay at the grave of a much revered tipuna, fondly remem­bered as Papa Henare by his children and mokopuna, and Uncle Henry by the rest of his whanau.

“To be here to pay homage to our ti­puna who lost his life 100 years ago in the Somme, was indeed a very special and emotional time for us all,” said his grandson, Alister Swann. 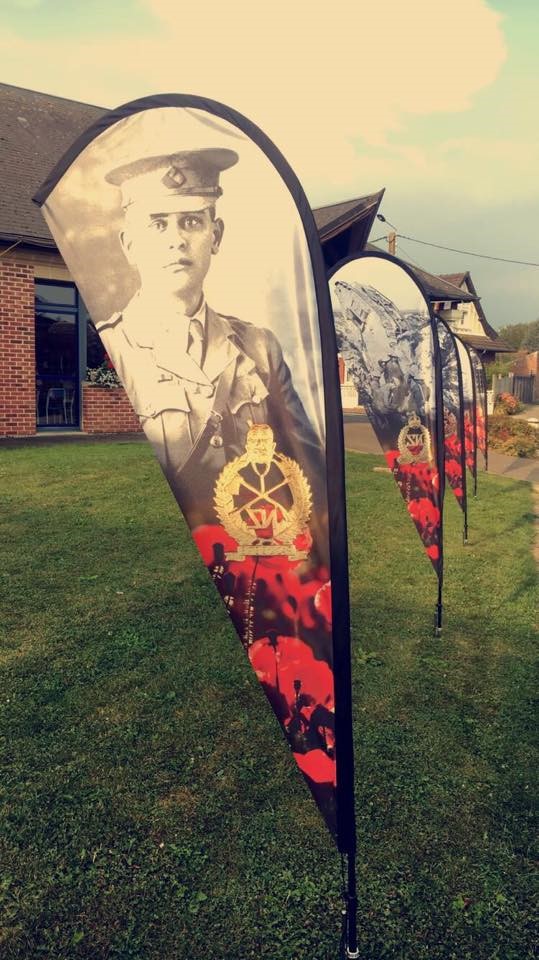 The day before, on 15 September, our whanau attended the 100th anniver­sary commemorations of the New Zea­land-led Battle of the Somme, at Cat­erpillar Valley Cemetery, Longueval. The French were on high security alert, with Prince Charles and other dignitaries attending the service. All but one road leading to Longueval had been cordoned off and we had to park our cars some dis­tance from Longueval village and walk to the security checkpoint. On arriving at the checkpoint we were greeted by a striking image of Uncle Henry embla­zoned on one of seven banners of WWI soldiers on display. This was totally un­expected and our reaction to seeing Papa Henare’s image was one of both great pride and heightened emotion.

The service at Caterpillar Valley Cem­etery was a fitting and moving tribute to the hundreds of NZ soldiers who were killed on the 15th of September, 1916, and who now lie in this cemetery, many in unnamed graves. Our whanau was the largest family group present and was the only noticeably Maori group. The Hon. Gerry Brownlee led the NZ del­egation, ably supported by our Tuhaka whanaunga, Michael Te Hau, who is married to Papa Henare’s great grand­niece Heni (nee Poi). Sir Mason and Lady Arohia Durie (nee Kohere), mem­bers of our party, attended this and the earlier dawn ceremony as formally-in­vited guests to the proceedings. 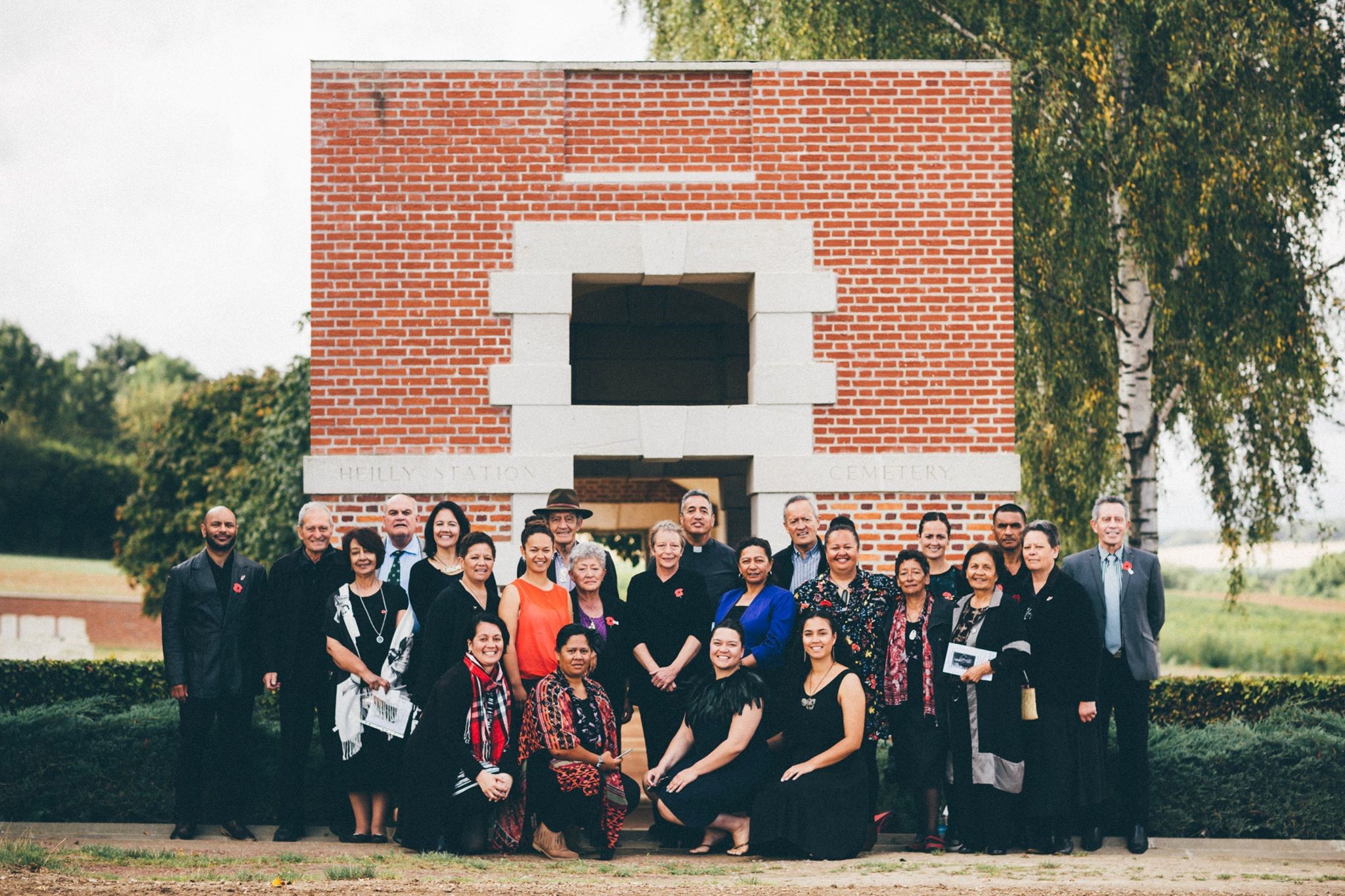 The next day, we gathered at the entrance to Heilly Station Cemetery for our own whanau service. We were all struck by the contrast of freshly ploughed, fence­less fields that stretched into the dis­tance and the well maintained cemetery with its smart brick entrance and neat, well-tended graves laid out row on row. The karanga went out announcing our arrival, echoing in this solitary valley of the Somme, accompanied by the soft chanting of moteatea and the wailing of a grieving whanau.

Anne Apirana, a great grandaugh­ter of Papa Henare, describes the great emotion felt by the whanau when we ar­rived at the cemetery.

Great grandson, Reverend Canon Brent Swann, wrote and conducted the memorial service, a thoughtful and lov­ing tribute to Henare; a military and tribal leader, farmer, haka exponent, ed­ucated at Te Aute College, fully fluent in Maori and English, a protector of his land and people, accomplished and in command of his world – a true ‘Renais­sance Man’.

An extract from the prayer of com­memoration, prepared by Brent, sums up the futility of war.

“On this day we especially ask that you would hold for ever all who suffered during the First World War, those who returned scarred by warfare, those who anxiously waited at home, and those who returned wounded, and disillu­sioned; those who mourned, and those communities that were diminished and suffered… And as you remember them, remember us, O Lord; grant us peace in our time and a longing for a day when people of every language, race and na­tion will come to know your justice, unity and love.”

The Battle of the Somme 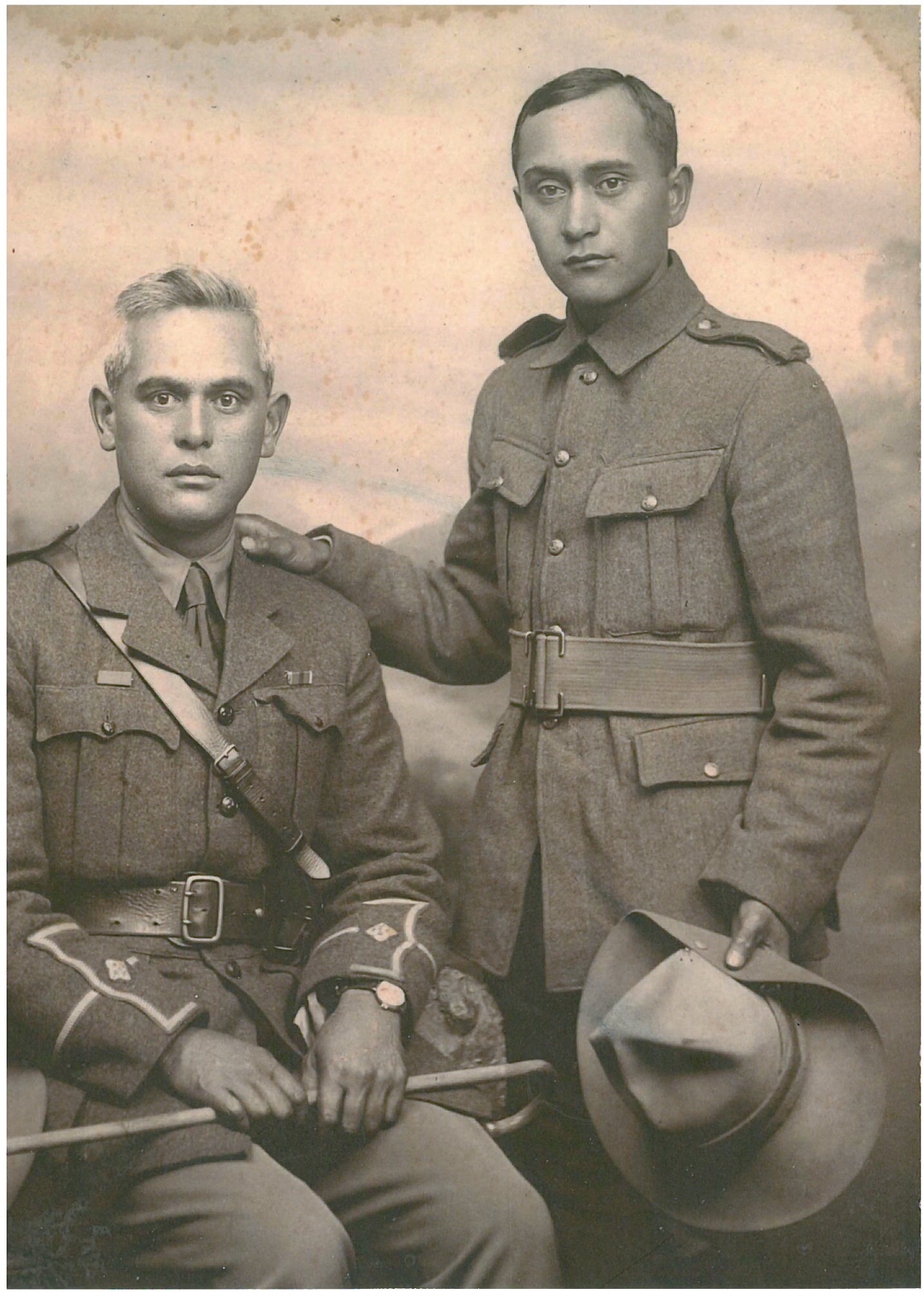 Henare Kohere and his platoon of 14 soldiers had come under heavy artillery bombardment on the eve of the Battle of the Somme. Henare was mortally wounded and was removed from the battlefield to the vicinity of Heilly Station, in the early hours of the day of the battle, where he died the next day.

Henare was a widower with three young children when he was requested by his people to go to war so that he might provide guidance, wise counsel, and support to his kinsmen and comrades in arms. The impact of his death on his whanau was felt most keenly by his children – Huinga, Hiki and Ngarangi. They were heart-broken by the loss of their beloved father, a grief that was palpable throughout their lives. Grief and loss were not new to them, their mother Ngarangi (nee Turei), having passed away six years earlier.

Henare’s mother, Henarata (nee Bristowe) and siblings, Reweti, Kuata, and Pohipi, were devastated, their only consolation being that they were able to share their grief and comfort one another. However, Tawhaikura, the youngest brother, having earlier served with the NZ troops at Gallipoli, was also present at the Somme at this time. We can only imagine how he must have felt on learning of his tuakana’s death, a pain and loss that he would endure on his own, away from his whanau, until he returned home to Rangiata in 1918, after the war. 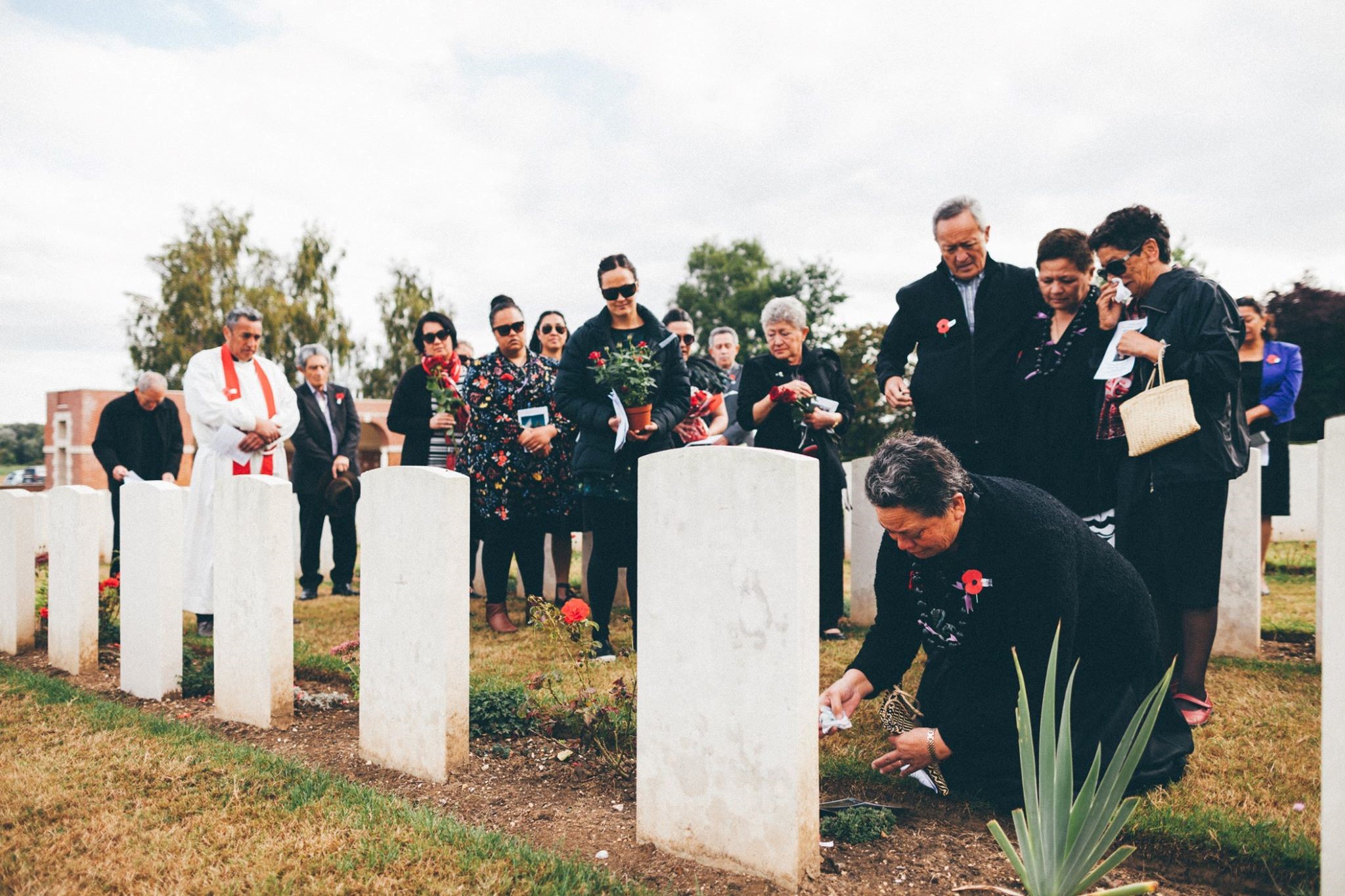 Whanau members brought with them to the service photographs of Ngarangi and her three children, stones from the beach at Rangiata, an assortment of poppies and flowers, and a copy of the Memo­rial Service for one of Uncle Henry’s recently deceased mokopuna, Omanga Nepia, a former military man himself.

Rarawa Kohere, delivered the wel­coming address, reciting Henare’s gene­alogical ties to various Ngati Porou hapu and highlighting places and landmarks of significance, including Henare’s kainga tipu, Rangitukia and Rangiata. The whanau then sang Tipare o Niu, a lament written for the chief, Wikiriwhi Matauru, by his mother Hinewahirangi, grieving his absence and citing land­marks of the homeland that Wikiriwhi and Henare shared.

Papa Henare’s mokopuna, Wikeepa Rewharewha and Janene Swann, gave the readings and the service was comple­mented by himene, haka, speeches, and shared reflections on the life of Uncle Henry, and the shattering impact of his valiant but tragic death.

Rei Kohere read a copy of the last let­ter that Henare wrote to his children, beseeching them to be good to one an­other, their taina, tuakana, matua and tipuna, and saying that “when I return, Hiki, [Henare’s son] you will be a big boy.” Rei also shared the story of Henare swimming out to save the sole survivor of a boat, the Whakapai, that had cap­sized in high seas in the channel between Te Motu o Kaiawa (Whangaokena) and Tapuarata Beach, on the mainland. Henare received the Royal Humane  Society’s bronze medal for this heroic deed. The remains of the Whakapai still lie on the beach, and Rei was prompted to gather a selection of small stones from this vicinity, to take with him to France for whanau to place on Henare’s grave as a tangible link between Henare’s home and his resting place.

Alister Swann shared this reflection on his grandfather at the graveside.

“From what I’ve read and heard my grandfather was an intelligent, hardwork­ing and well respected leader to those sol­diers who were under his command. He was ahead of his time and was destined for many great things only to have his life so tragically cut short at the age of 36.”

For members of the whanau, most of whom were visiting Uncle Henry’s bur­ial place for the first time, the occasion was a blend of sadness and relief. Henare is someone who has been such an impor­tant ‘presence’ in our whanau throughout the generations, and the Somme has for so long been synonymous with a distant time and place, that has been the back­drop to our whanau’s collective sadness and sense of loss. 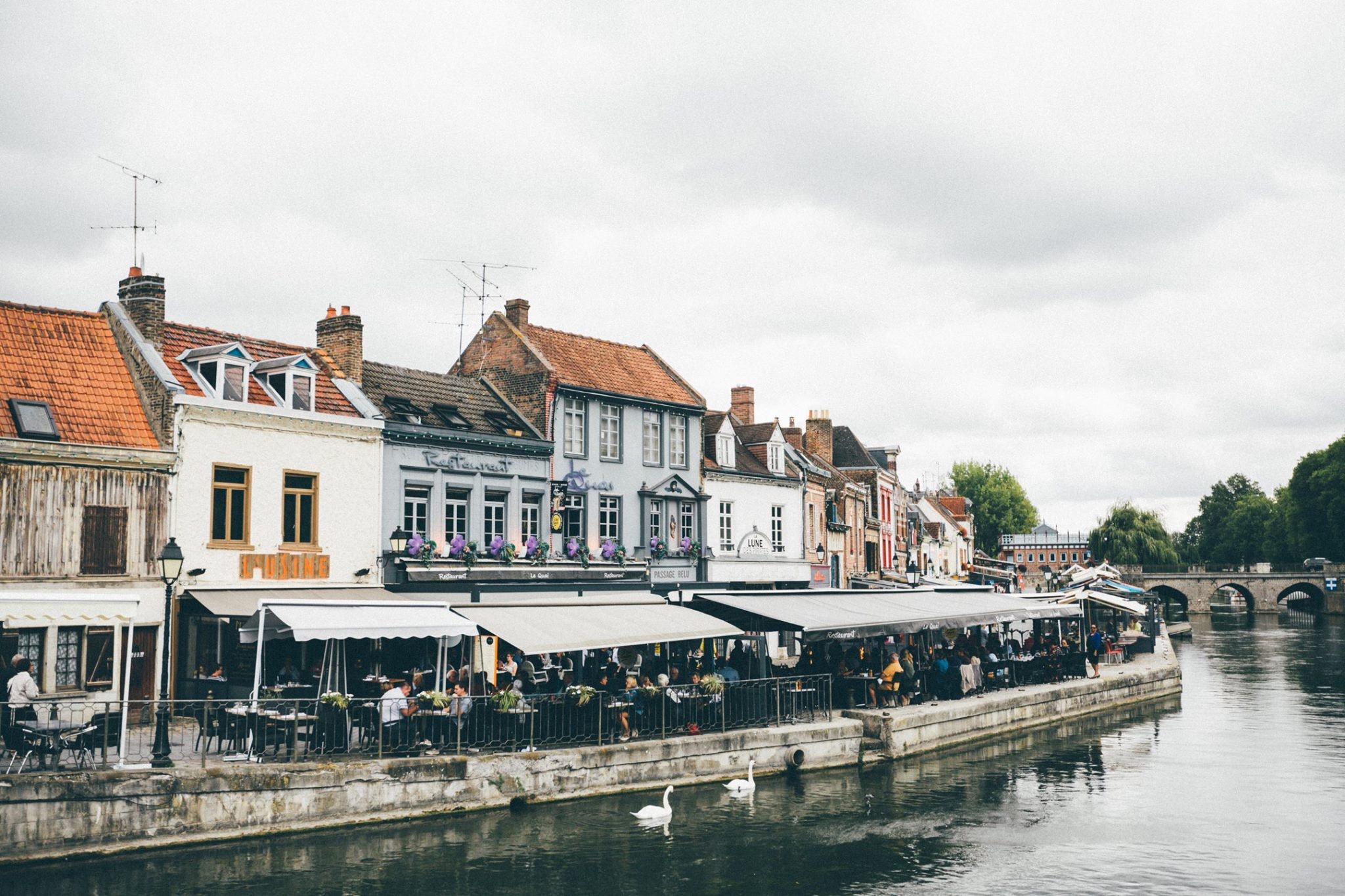 After a round of whanau photographs, culminating in photos taken at the his­toric Amiens Cathedral, the whanau concluded the commemorations with a ‘hakari’, at a restaurant on the bank of the Somme River, in nearby Amiens.

A highlight of our trip to the Somme was our stay in Amiens. The majority of us were able to stay together at an idyllic property, with its unique accom­modation, its own little stream, supplies of fresh vegetables, French cuisine and fine wines. Host extraordinaire, Hubert Sergeant, his son, friends and miniature pony, Pearl, provided us with first class hospitality, including flutes of cham­pagne on arrival, and a most enjoyable and memorable stay. Hubert’s retreat became the temporary ‘Kohere Marae’ in Amiens, accommodating our hui, waiata practices, and social events. Stay­ing together for those 3 days in Amiens strengthened whanau bonds, unity and collegiality for all of us.

“We travellers share a bond now and our pilgrimage to remember and recon­nect with Uncle Henry has created a great platform for wider whanau inter­action and relationships,” said Awhina Houkamau, grandniece.

Alister Swann shared the same senti­ment saying, “Memories of this journey will remain with me and my daughters forever. I am blessed by having shared this whole experience with my daugh­ters, members of our Swann and ex­tended Kohere whanau.”

We acknowledge that, over time, whanau members have made the journey to attend Uncle Henry’s grave site and no doubt will continue to do so in the future. What made this occasion so particularly powerful and emotional is that we were all there together as a whanau group at the very place where Henare died and was buried, exactly 100 years earlier. 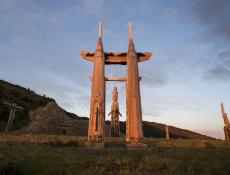 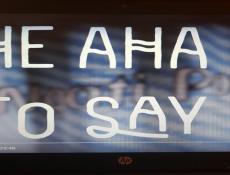